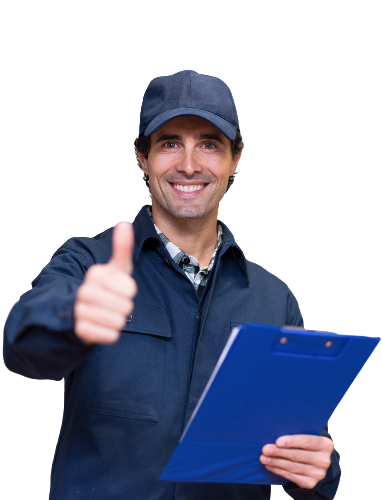 Your water heater is an essential appliance. It’s the heating element in your home that provides hot water for bathing, dishwashing, and laundry washing. If you are experiencing problems with your water heater or if it needs to be replaced, we have the expertise and experience necessary to help. We provide both full-service installation of a new water heater as well as emergency repair services for those times when things go wrong unexpectedly.

We offer free estimates on our service and all parts installed by us come with a warranty so that you can rest assured knowing you’re getting the best possible product at a fair price from people who care about their workmanship. Our technicians are professionally trained and certified in plumbing, gas fitting, fire protection systems (FPS), HVAC, and refrigeration that can help us handle any of your plumbing or heating needs for repair or replacement.

Call Today! We provide services to all of Stockton, Lodi, and the entire San Joaquin County 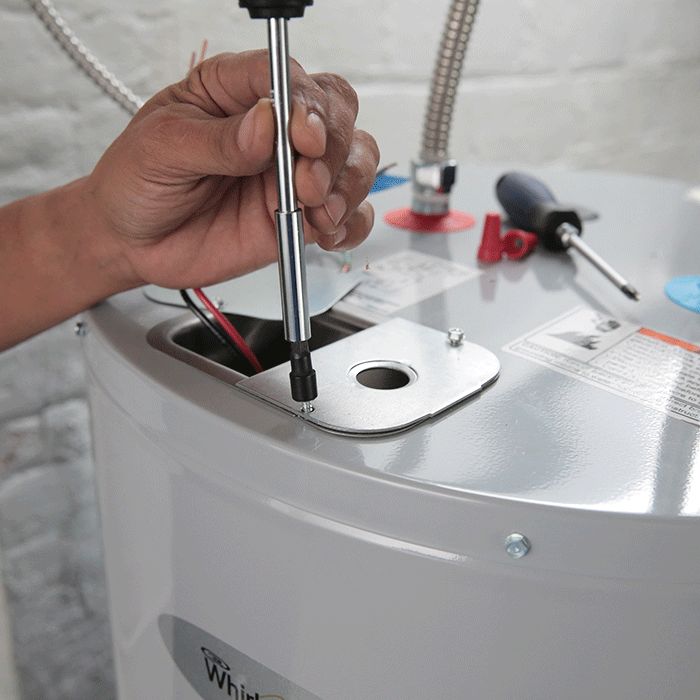 We Only Supply The Best Quality Water Heaters Available

We provide the best quality water heaters in replacement of your current one. Our prices are fair and we always have the newest models available for purchase. We are easily accessible and can be reached at all times if you would like to make an appointment with us.

We have a wide variety of Water heaters available to be placed in your home. We always provide the best service and we do not cut any costs when it comes to your repairs or installations. Our prices are fair and competitive.

Call us today for a FREE estimate! Or you may fill out the contact form on this page using the link provided and someone will get back to you as soon as possible. Thank you for choosing our Stockton Plumbing Company as your plumbing provider; we are looking forward to improving your residence!

Not Sure Which Water Heater Is Best For You?

Gas water heaters are often the most common type of hot water heater, as well as the most cost-effective in terms of energy efficiency. This type of water heater has been around since the late 1800s and has existed for decades in a similar form. These water heaters are created by gas electricity and air to produce a flame that heats another metal coil. The coil is then in contact with either piping or containers with an increased volume of liquid, which transfers energy from the coil and produces hot water.

The Pros of gas water heaters are as follows:

– there is no need to mess with the thermostat
– the heater does not get as hot as an electric one
– they can last up to 12 years or more
– installation is easy as long as you have a working pressure and water supply in your house, since it doesn’t need electric to function
– it heats up very rapidly

The Cons of gas water heaters are as follows:

– heating them requires natural gas or oil, which can be expensive depending on where you live in Stockton/San Joaquin County and how much you use; this is less of an issue for people who use natural gas for cooking and heating, however
– they are less efficient 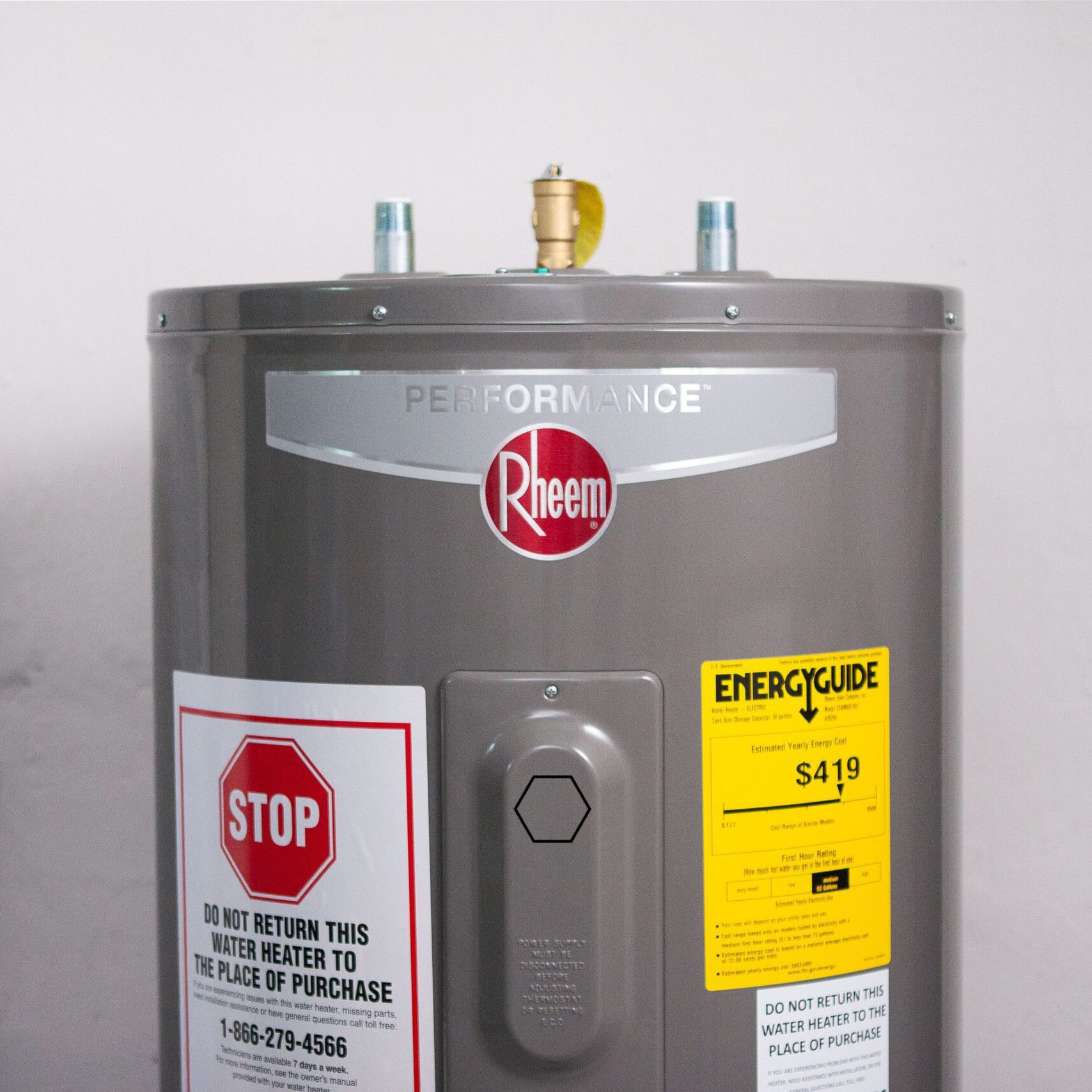 Pros:
– Slow power outages do not affect the water temperature
– Can be more energy efficient than gas water heaters, as electric water heaters can maintain an exact and constant temperature regardless of demand.
– There is a lower chance of getting scalded from hot water

Cons:
– An Electric water heater has a higher cost to buy and maintain over fuel water heaters in the long term.
– An Electric Water Heater is not as durable, because it relies on weak plastic tubes to carry hot water throughout your house. They freeze easily due to the nature of the material they are made from, which means you need more insulation for your pipes, and if you don’t have that then you’ll have to deal

GET YOUR FREE QUOTE

GIVE US A CALL NOW! For professional water heater service at competitive rates

Tank water heaters use hot water that is stored in a tank to keep it heated. They can be installed inside or outside of the house where more than one family lives, and be easily moved from place to place. Tank Water Heaters are less expensive than tankless water heaters, and provide enough hot water for larger families. There are some drawbacks to regular tank water heaters- they cannot be installed in regions where the water is cold due to climate, they emit fumes, and require manual cleaning if not self-cleaning. Regular tanked water heating tanks take up more space than a single family would need, but they provide more hot water for large families.

Pros of a Tank Water Heater:

-Tank heating is easier to use in regions where the water can be cooler due to climate.

-Tank water heaters are portable and can be easily installed outside of the house or apartment. They are also recommended for renters since they are easy to move from place to place.

-Tank Water heaters that use gas or oil can emit fumes.

-The tank water heating will have to be drained and cleaned manually by a professional if the tank is not already self-cleaning.

-Water tanks are large and heavy, making them difficult to move from place to place. Water tanks also take up a lot of space in an apartment or house. 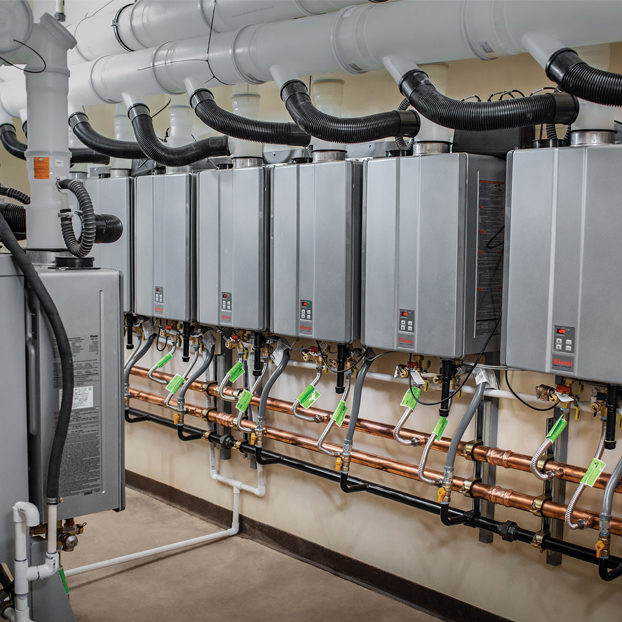 They can only be used in a home if it has an individual hot water line for the particular appliance, which is usually installed when the house is built. They are also more expensive to operate than traditional tankless gas water heaters. Water can be heated instantly by running hot water through the unit, and does not have to sit in a storage tank until the hot water is used. Water temperature is controlled by an adjustable thermostat, which can be set to provide either slower heating (when less than full) or instantaneous heating of water at all times.

– Tankless water heaters can be installed in any room of the house, so the amount of plumbing work will depend on where they’re being installed.

– The plumbing work is also not as extensive because there are no pipes needed for a water heater in most cases.

– Tankless water heaters are much more energy efficient than traditional ones because they use far less electricity when they’re being used.

– They’re smaller than a typical storage tank and have no moving parts that might break down, like pumps or valves, making them more durable and easier to fix if anything were to go wrong.

– Water that comes from them is much hotter than a traditional storage tank, which means there’s less need for users of the water to use hot water heaters in their own homes.

– Water flow is not decreased as it is with traditional ones because these tankless water heaters will deliver as much water as needed through the home at one time.

– Water tank capacity is larger and more consistent because there are no storage tanks that need to be refilled with hot water whenever they’re used.

– A typical tankless water heater will cost more than a traditional storage tank because they’re smaller and tend to be better quality.

– They’re also slightly noisier than a traditional storage tank, which might not be ideal for everyone.

There are many tips for how to take care of your water heater and maintain its quality. It’s always smart to keep an eye on the temperature setting and make sure that it’s not too high since this causes unnecessary wear and tear on the machine; also check the surrounding area for leaks, which could have caused a gas or electric odor or unusual sounds coming from the machine. Proper water heater maintenance includes checking the condition of the anode rod every few months, and replacing it if necessary. Anodes are installed to prevent corrosion damage on your water heater; when they wear out, this means that the water in your tank is corroding and it’s time for a replacement.

What to Consider Before Hot Water Heater Replacement?

Water heaters typically last from 8 to 12 years. When the hot water heater has reached the end of its useful lifespan, homeowners are faced with the decision to repair or replace. The biggest consideration when deciding whether or not to fix your current hot water heater is the cost. If your current water heater is working but making strange noises, this may be a sign that it needs to be replaced soon (be sure to check if it is under warranty). Other indicators that a new hot water tank may be in order are corrosion on the heating element and sediment buildup around the bottom of the tank.

When making a final decision be sure to consult with professionals for advice to help you make an informed decision. Our Stockton water heater experts are well versed in water heater repair and replacement, so it never hurts to ask for their advice. We will be able to give you information on the cost of repairing or replacing your existing hot water tank, and can also provide you with helpful tips on how to extend the life of your water heater or prevent future problems.

Affordable Water Heater Services for all of San Joaquin County. Call Today for a Free Estimate!

Stockton Water Heater Repair is a subsidiary website of 24hr Discount Plumbing, a licensed Stockton City Plumber. Our mission is to deliver you trusted quality plumbing services at affordable rates.

CALL FOR AN ESTIMATE!